Useful tips to visit the coast in two days

If you have only 48 hours to visit the Amalfi Coast and Sorrento Peninsula, the best choice is to create an itinerary that will let you discover the beauties of both.

Here are some tips that can help you draw your itinerary.

1. Sorrento between history, art and culture 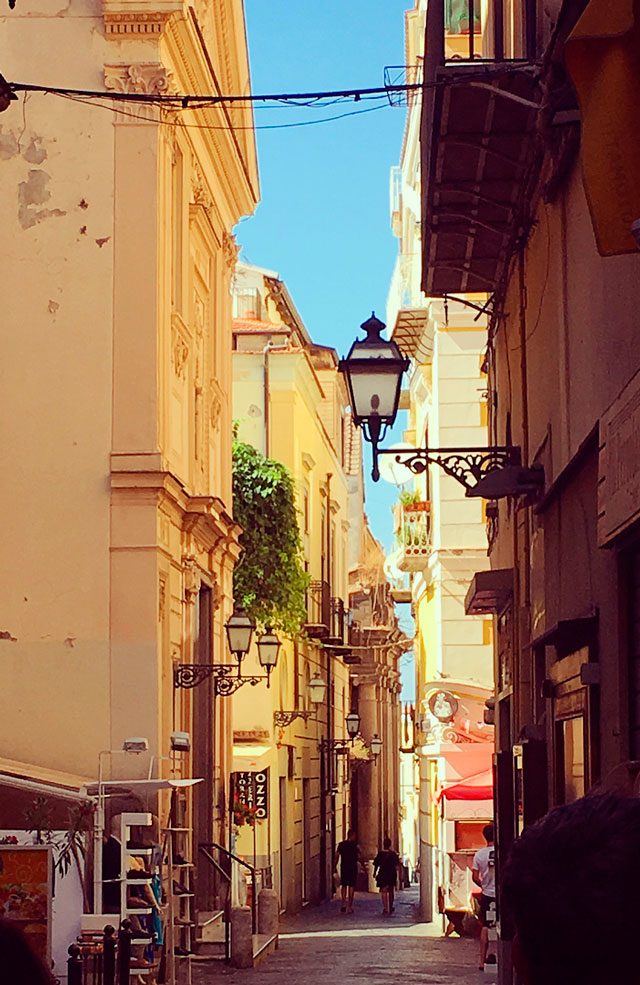 Through the stops of your trip along the Campanian coastline you cannot miss a fascinating city like Sorrento, which beyond its natural beauties with the picturesque scenery on the Gulf of Naples, hides artistic and cultural treasures in every corner.

The greatest expression of the ancient history of Sorrento is the Correale Museum where Greek, Roman, medieval works and remains are preserved, such as statues, furnishings and ancient art pieces. The Museum also hosts some editions of the works of the poet Torquato Tasso, birth in Sorrento.

Stories of Sorrento history can be found also by visiting the Sedile Dominova, renaissance style structure that has been well preserved after many centuries and which was the center of Roman public life. The building featuring frescoes in its interior, while the central one represents the coat of arms of the City supported by two angels.

Not far from Sedile Dominova, you can visit the Cathedral of Sorrento, which hosts numerous marbles and wooden works, including a fifteenth-century crucifix, of great Neapolitan authors. When you leave the Duomo you will walk through 'Corso Italia' the main street of the city from which, taking the side streets, you can enter in the historic centre of Sorrento between typical boutiques and souvenir shops.

Other interesting buildings of the city are the Basilica of Sant'Antonino, the Saint of Sorrento, the 14th-century cloister of St. Francis next to the monastery and the church, as well as the beautiful municipal villa from which you can admire the Gulf of Naples. If you want to take a break between a visit and a walk, the central square of Sorrento, Piazza Tasso, is the perfect place to sip a coffee in total relaxation. 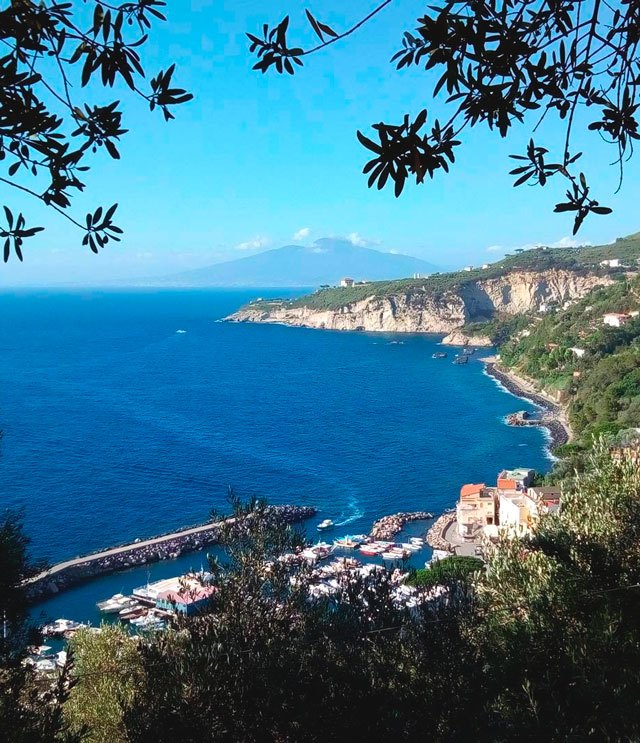 Continuing and crossing Sorrento, you can come to the quiet Massa Lubrense legend says it was the land of the sirens that enchanted Ulysses.

In the main square there is a terrace that allows you to admire the panorama of Capri and the Sorrento peninsula. Massa is especially known for the Marina della Lobra, from which, in summer season, depart tours and excursions to the nearby islands and the Amalfi Coast.

The Marina della Lobra has a characteristic and romantic stroll on the sea just a few steps away from the waves that break into the rocks that create a natural barrier, while on the horizon you can admire the profile of Naples and Vesuvius.

Massa Lubrense is made up of so many hamlets and among them is Sant'Agata sui due Golfi, famous due to its position that allows to admire both the Gulf of Naples and Gulf of Salerno.

Massa Lubrense is also famous for its beaches like the beach of Puolo, a small seaside village and the farthest Nerano perfect for a dip among the crystal celar waters. If you love adventure, we recommend to discover the Bay of Ieranto accessible only through a path on the mountains or by boat, but is a true natural paradise. 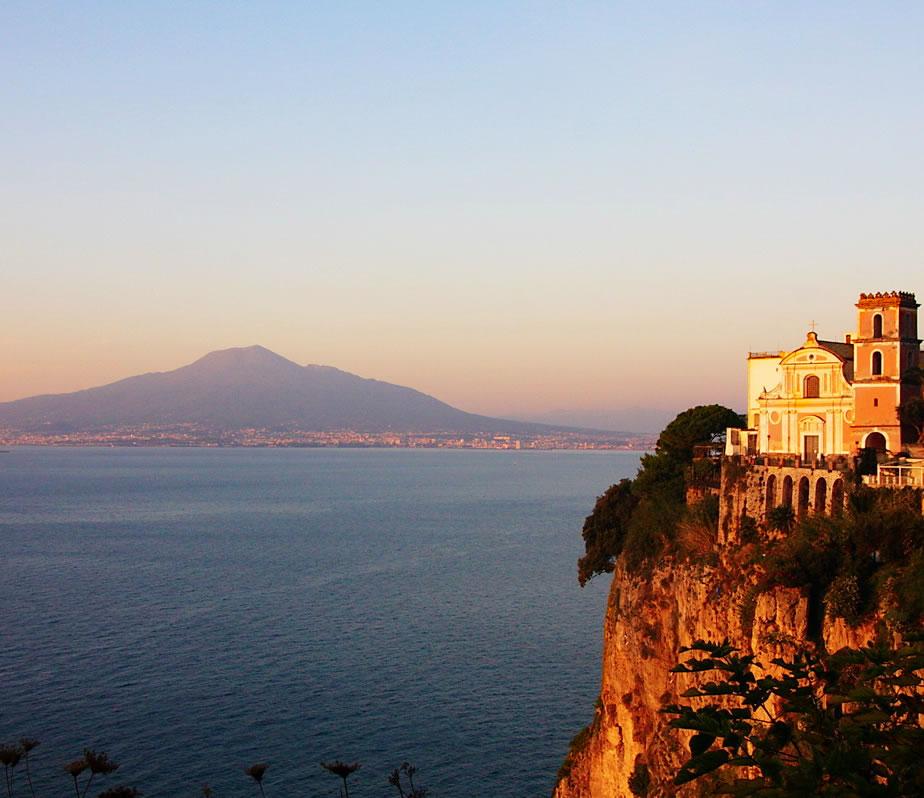 Out of the Sorrento Peninsula, there is a place of equally beautiful as Vico Equense.

Border city between the Sorrento peninsula and the rest of the Gulf, Vico allows you to relax for a few hours among the bars in the main square.

Walking around Vico's historic alleys you could spend a few minutes visiting the incredible Giusso Castle, former military and residential structure that was built at the end of the 13th century.
Certainly worth a visit are also some religious buildings of the city such as the Church of the Annunziata unique curch in the peninsula erected in Gothic and Baroque style, and the sanctuary of Santa Maria del Toro.
If you have more hours at your disposal, you may want to visit the Mineralogical Museum or the Archaeological Museum that preserves remains of vases, furnishings, weapons and bronze objects of ancient Greek and Roman civilizations.

4. Shopping and relaxation in Positano on the Amalfi Coast 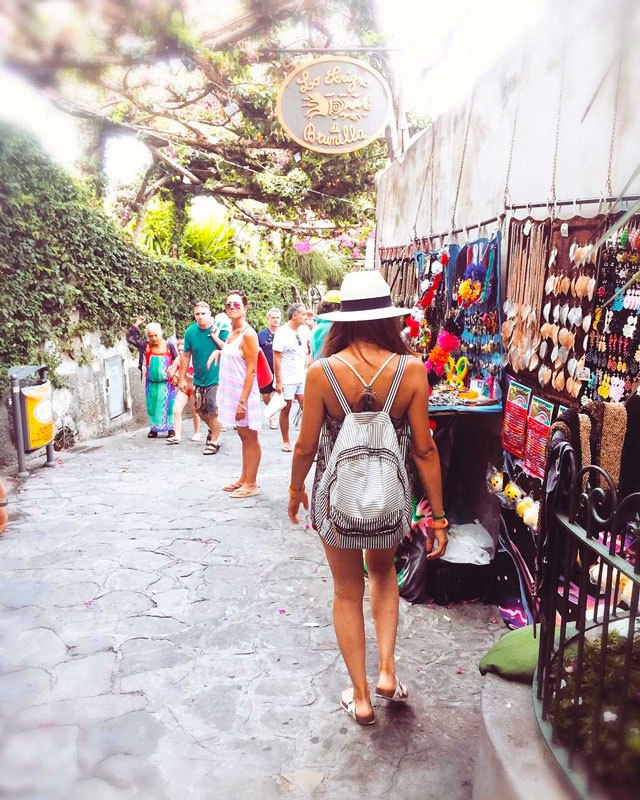 Among the main destinations you can visit on the Amalfi Coast is the famous Positano.

Elegant and refined, Positano it's perfect for those who want to combine the possibility to visit the several boutiques and souvenir shops where buy limoncello bottles and precious ceramics, with the possibility of diving between the crystal clear waters of the Coast, choosing between the two beaches of Fornillo and Marina Grande.

Famous for the postcard landscapes of the Gulf, Positano may well be the right choice for a lunch, or even a sunset dinner, based on seafood, a traditional dish in the area, served with local wine and typical sweets such as Lemon delight and the Positanese cake.

5. Walk through the streets of Amalfi 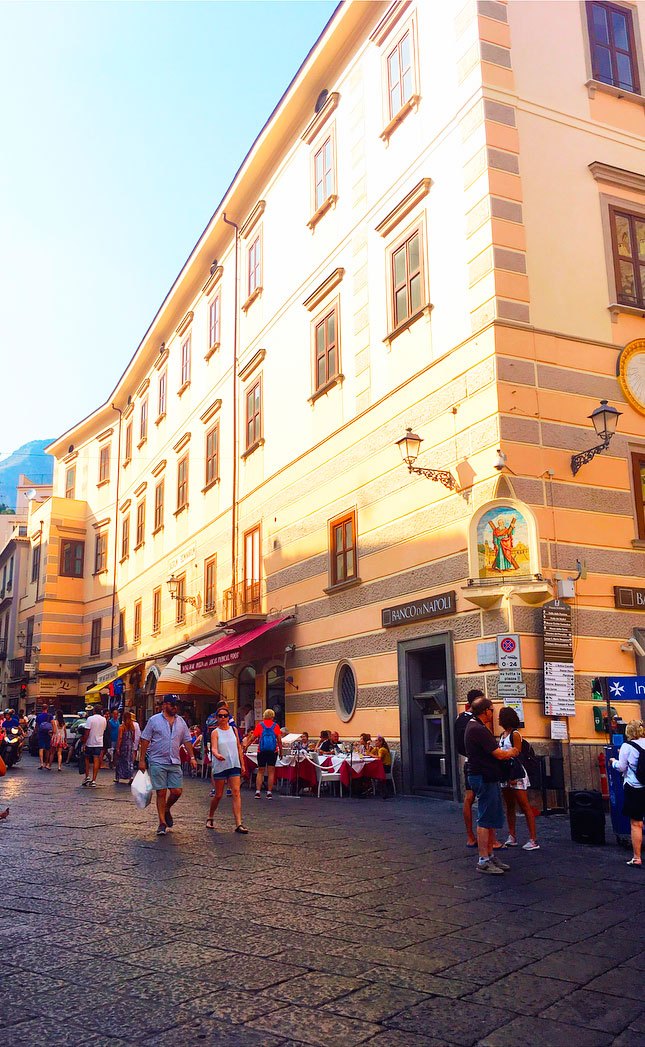 Of course you can not miss a visit to the heart of the Amalfi Coast, the ancient Maritime Republic of Amalfi City.

The thriving center of Mediterranean trade in medieval times, Amalfi preserves its incredible charm that propagates in the architectural and artistic works of this beautiful city.

Among them, the impressive Duomo di Amalfi, in the center of the city, dedicated to Sant'Andrea Apostolo, the Saint of Amalfi, is located upstream of a huge staircase showing its Romanesque facade, which is also reflected in the central naves of the church together with other styles that have influenced her in the course of various renovations over the centuries. We also reccomend you to visit the Paper Museum and the Compass Museum.

6. Discovering the taste in the villages of Maiori and Minori 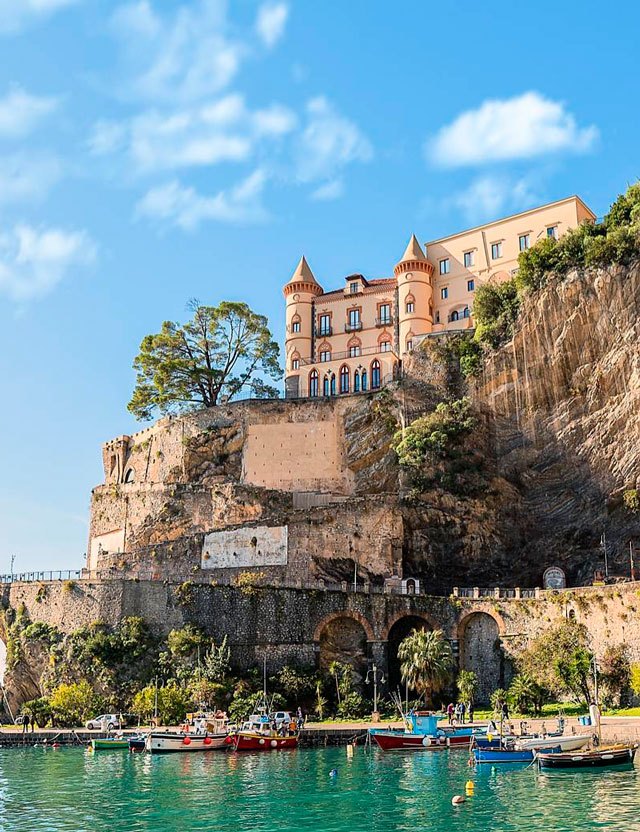 Your journey to discover the Amalfi Coast can not stop at Amalfi. We suggest you also take a look at the beautiful villas of Ravello not far from Amalfi, from where the panorama, if possible, is even more breathtaking due to the colors of the gardens that decorate them.

Getting over ravello, Maiori and Minori are two other towns where you can explore itineraries of all kinds, from naturalistic paths to gourmet food paths with the typical sea and land flavors of these two little paradise.

Maiori has one of the most extensive beaches on the coast where you can have a dip in crystal clear waters in total relax, while the Pandora and Sulphurous Caves, accessible only by sea, are two fascinating gifts of nature that the strength of the sea has dug into the mighty rock.

Not only nature and relaxation, but also trails in the flavors of this city that will allow you to sample Maiori's typical tastes, such as the dairy products and fish dishes or even chocolate eggplants that are typical Maiorese dish.

To find out, however, are the St Nicholas Castle of Thoro-Plano and the Collegiate Church of Santa Maria at Sea.

A few kilometers from Maiori, it is located Minori rich in history and culture. In Minori you can relax between a visit to Villa Romana, which in ancient times probably hosted roman high-class families who used to spend the holidays on this stretch of coast fascinated by the natural beauties and tranquility that there are here.

Another monument of Maiori is the Basilica of Santa Trifomena, inside which the remains are kept.

Between history and natural beauty, you can not miss the chance to sample Minori's delicacies such as lemon noodles, the inevitable lemon cake or the most famous sweet ricotta and pear.

7. Cetara and its famous anchovies speciality 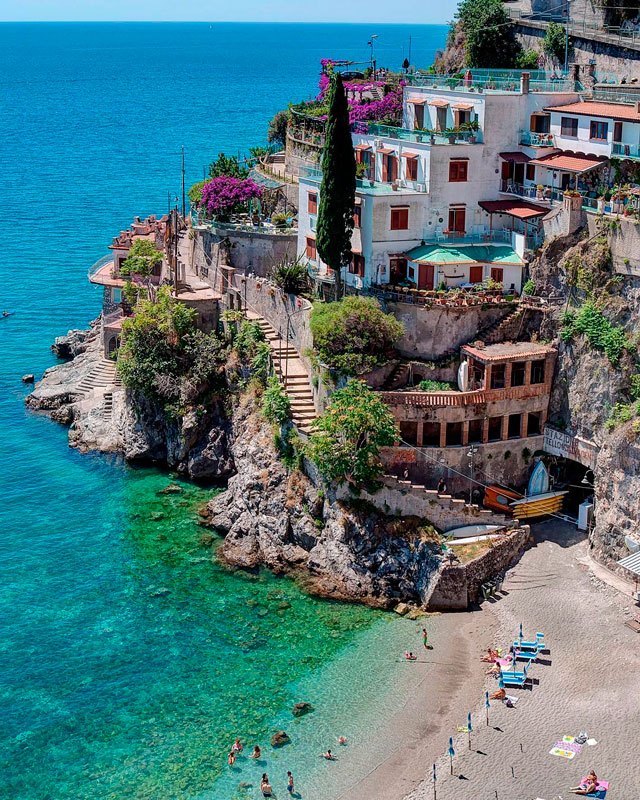 As you approach the end of the coast, you can see the small but beautiful Cetara, seaside village famous for its small but comfortable beaches but, above all, for its fish-based cuisine with the "slicing of anchovies" obtained due to a special process of salting anchovies, and tuna, first ingredients in the gourmet restaurants of Cetara.

Walking, especially at sunset, among the small streets surrounded by typical houses of the seaside village, you can fell the peace and the tranquillity immersed in a dreamlike atmosphere.

The vicar tower of Cetara, an outpost of an ancient fortification system to repel enemy attacks from the sea, the church of San Paolo Apostolo and San Francesco to Cetara are the historical and religious symbols of this delightful and ancient village. 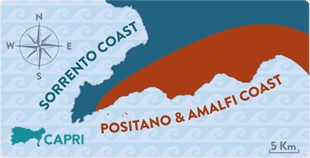 Maria Grazia Restaurant is located in a little village called Nerano, this restaurant is the inventor of the famous “Spaghetti alla Ner...

AequaLimo offers a transfer service and private tours to discover the beauties of the Campania Region with multilingual drivers.

In the wonderful historical landscape of Positano, Hotel La Bougainville, offers a warm family welcome to its guests.

Villa Mambrini give you an unforgettable vacation in one of the best natural landscape frame of Sorrento town.

Touristic Village situated in Nerano, one of the most suggestive places of all Sorrento Peninsula, not far from Sorrento.

Lino Tours organizes tours and transfer services along the Sorrento Peninsula and in the places of interest in the region of Campania.

Linda will guide you to the ancient archaeological sites of Pompeii and Herculaneum.

Seduction Vacanze is a tour operator based in Sorrento specialised in private tours of Campania, group tours in Italy and transfers